In search of Ahmad Khatib

Ahmad Khatib played a vital role in the development of Islam in the Netherlands East Indies. Last July, Yasrul Huda and Nico Kaptein visited the village in Sumatra where he was born in 1860, in an effort to find traces of his legacy. This is their report.

Minangkabau in West Sumatra is a region from where a remarkably high number of persons originate who played a vital role in Islamic and nationalist developments in Indonesia at the end of the 19th and early 20th centuries. Among them are Haji Rasul, Agus Salim, Muhammad Natsir, Muhammad Hatta, and Hamka. Tangible indications of their lives in the form of houses, graves, and museums can be found in their places of origin.

Ahmad Khatib al-Minangkabawi (1860-1915), another leading scholar at the time, also originated from Minangkabau – as his name indicates. Both having an interest in Ahmad Khatib, we were curious to learn whether there were any reminiscences pointing to him in the village where he was born.

Ahmad Khatib was born in 1860 in the village Balai Gurah, Koto Tuo, not far from present-day Bukittinggi. When he was 10 years old, his family migrated to Mecca and young Ahmad was taken along. In Mecca he eventually developed into a well-known scholar of Islam who taught in the Great Mosque of Mecca his entire life until he died in 1915.

Although working in Mecca, Ahmad Khatib maintained intense contacts with his country of origin through the many Indonesian pilgrims who came to Mecca for the yearly hajj and through Indonesian students who spent time studying in the Holy City before they returned home again. Based in Mecca, Ahmad Khatib produced writings which were in line with the traditional type of Muslim scholarship current at the time in Mecca, focussing on issues of conventional Islamic jurisprudence.

Interestingly, at times he also wrote works in which he addressed the situation in his native Minangkabau and the Netherlands East Indies at large. Best known are his books (in Arabic and Malay) in which he passionately propagated to replace the customary (adat) matrilineal inheritance rules which were current in Minangkabau, with the rules from the Shafi ʿite school of law.

In July 2017 we had the opportunity to search for traces of Ahmad Khatib in his place of origin. First, we visited a pesantren which bears his name. A pesantren is an Islamic boarding school, which can have many different forms and of which tens of thousands exist in Indonesia. This pesantren was established as late as 2009 and was given the name of Ahmad Khatib, because it was expected that his reputation would attract students to study in this pesantren.

At present, the pesantren holds 150 male students in the age of 10 to 15, and who come from neighbouring places, but also from further away, like Medan in North Sumatra. In the teaching curriculum Tahfiz al-Qurʾan (memorization of the Qur ʾan) takes the most important place. Besides this, the students follow other subjects, both religious and non-religious, in line with the curriculum of the Ministry of Education (see for further details on this pesantren its website). 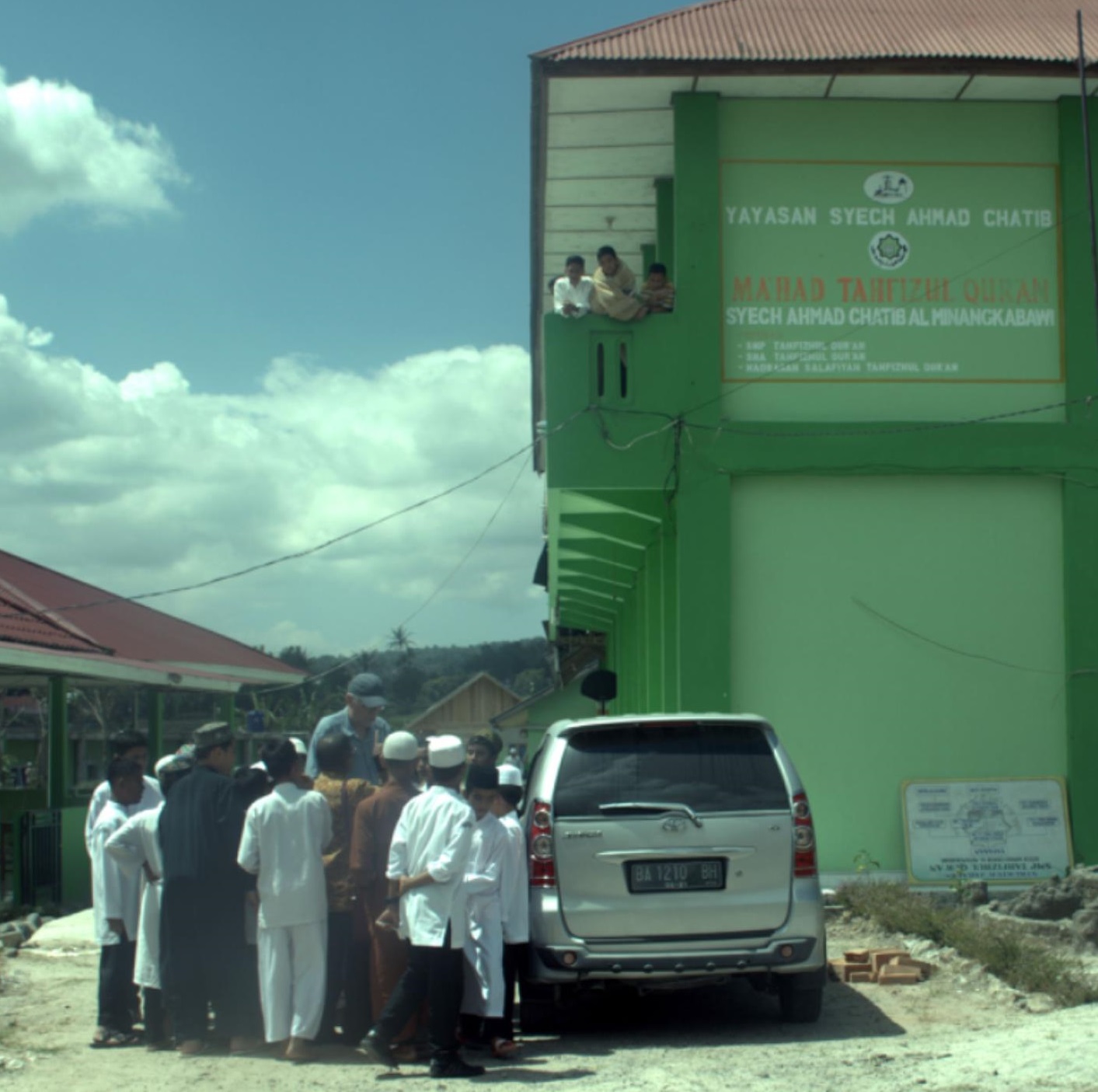 In addition to the pesantren, we visited the nearby location where the traditional family house (rumah gadang) of Ahmad Khatib’s family had been located. In this house Ahmad Khatib was born in 1860, but regrettably the house was destroyed by a fire in 1993. On the site there are two unidentified graves, one of which possibly holds the remains of the mother of Ahmad Khatib.

Our last visit was to another nearby location: the house of Abdul Latif Syakur (1882-1963), a local ulama who had been a student of Ahmad Khatib in Mecca. There a number of portraits of Minangkabau scholars from the early 20th century were shown to us,as well as handwritten and printed writings of Abdul Latif, but nothing reminded of Ahmad Khatib.

At the end of the day, it appeared that the reminiscences of Ahmad Khatib in his birth place are rather limited and disappointing. The most noticeable is the use of his name for the pesantren, but apart from that, in its curriculum the pesantren does not pay special attention to his work. Although Ahmad Khatib exercised a large influence on the further spread of strict Islamic notions and rules in the Netherlands East Indies, the fact that he spent almost his entire life in Mecca probably accounts for the virtual absence of tangible indications of him in his birthplace.

It is telling about different stories on searching of Ahmad khatib <a href="https://www.huffingtonpost.com/donna-marie-williams/college-students-use-essa_b_8773028.html">essay writing companies</a> reviews. That info you must read to know their importance and essay reviews. Then you could understood all their useful assignments.