Cairo, May 2014. From several wifi-equipped locations across the city, Viviane Fairbank reports about the position of women in post-revolution Egypt.

This article was completed one day before the Egyptian elections (26-27 May) that voted in former military chief Abdel Fattah el-Sisi as president (with an alleged 96 per cent of the vote). Sketch and photos by Viviane Fairbank.

The imitation gold on my wedding ring is chipping off. I notice the flaw as I twirl it around uneasily, still not used to its snug grip on my finger, or to the shadowed indent that it leaves on my skin.

Not that I care too much. After all, I only have to wear it for a month. During the month of May 2014, I use this ring as a weapon of defence, confirming to all that I am indeed a woman who is “spoken for”– all the better to prepare myself for my first time living in a society where men and women have irrefutably different statuses.

This is Cairo, Egypt; a society where, according to a 2013 United Nations report (Social, Economic, and Legal Empowerment of Egyptian Women, which can be downloaded here), over 99 per cent of women and girls admit to having experienced some form of sexual harassment in their lifetime. It is a country where 73 per cent of girls aged 15-17 agree that a man is justified to beat his wife if she argues with him, and where women’s participation in the labour market is among the lowest in the world.

That doesn’t mean Egyptian women stay at home, that all Egyptian men are sexist, or that I can’t walk around a Cairo neighbourhood without an escort. It just means that there’s a very different tone to the saying, “Don’t talk to strangers” – in fact, it’s better to just not make eye contact, I’m told.

This year, following the mass protests of 2011 and 2013 and the ouster of both Egypt’s former dictator and the country’s first elected president since, Egypt is in a state of flux. The entire country is still recovering from the giant loss of tourism that saw most foreigners leave the country during the past few years, and it is preparing itself for new presidential elections at the end of the month. The status of women within this context is ever fluid, balancing delicately between the country’s newly renewed hate of the Muslim Brotherhood and its still deeply-entrenched patriarchy.

Recently especially, Egypt has seen the strange case of several women with hijabs denied entrance into restaurants and bars, in fear that they may lower alcohol sales or simply change the mood of the venue, as Daily News Egypt reports.

Meanwhile, on the first day of May, I have my first Arabic lesson with my teacher, a woman who used to work at the American University before the revolution sent all of her students back home. The first thing I notice about her is her height. She walks through the door short and round – not fat at all, but curved by a noticeable hump on her back, as if to imply that she could easily become more circular at any second if she let her attention slip. Her hair has the wave of hair that has been pushed back by a pair of glasses and tucked behind a pair of ears for years; the hair that only teachers can properly develop.

Soon, she and I are seated at the dining room table – her, armed with flashcards, and me, defenceless, picking at my wedding ring. During the first hour, I learn how to introduce myself, how to say man and boy, woman and girl. I understand that a female can only be called a woman once she is married. Otherwise, no matter her age, she is a girl.

My teacher looks at me and asks, “Anti bint walla sitt?” Am I a girl or a woman? She thinks she knows the answer, still treating me as a young girl, and I almost confirm her suspicions but I catch myself, making sure to flash the shinier part of my ring toward her.

“Ana sitt,” I answer. I am a woman. I’m not really married, so I suppose I am lying according to the Arabic language, but I have a feeling I’ll have to do that more than once as a young woman in Cairo. And despite the irony of lying in Arabic to my Arabic language teacher, I feel justified in keeping my girlish nature to myself. I do consider myself a woman, and having a husband has nothing to do with it. 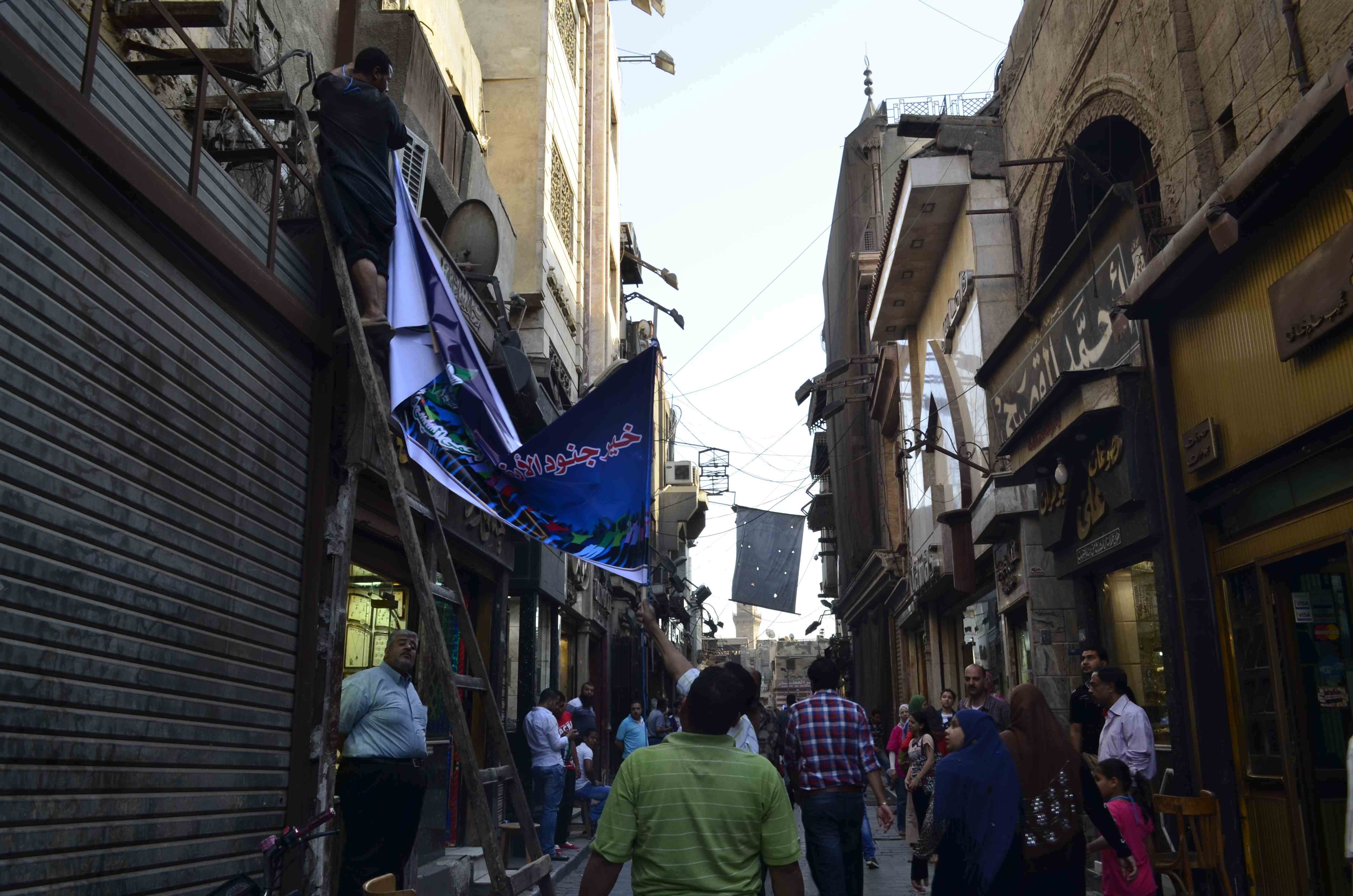 Egyptians putting up a pro-Sisi banner in the medieval quarter of Cairo.

Indeed, as soon as my teacher confirms that I am a “woman,” she feels much more comfortable around me, often mentioning her husband and children. She is a Coptic Christian, as are one-tenth of Egyptians, and she now becomes much more verbal with her disapproval of some Muslim practices in the country (Egypt is, after all, about 90 per cent Muslim). These include, very generally, hearing the call to prayer five times a day and believing that woman’s modesty outside rests in her burka, hijab, niqab, or whatever else fits depending on the practice. As I walk down the street with my teacher and practice how to ask for directions, she makes sure to pick the right man to approach, who won’t be shocked by being approached by a woman, as others might be.

Later my curious teacher asks me, through the pretence of our lessons, what my religion is, if I have any children, and if I “properly” celebrated my wedding. I happily answer, reminding myself that this inquisitiveness is much more innocent in its motives than what I experience from others across the city.

One day later, riding a taxi home, I am asked if I am married for a very different reason. As I direct my taxi in the limited Arabic that my petite teacher has given me, the man looks back at me with a slight twitch of the mouth, lowering the sound of the Qoranic reading that is seeping from his stereo.

Damn. I’ve inadvertently made eye contact. Seeing that his window of opportunity is open, the man proceeds to ask me if I have a husband or a brother – the two (male) obstacles between him and my immodest self. Rubbing my wedding ring with my thumb to make it shine, I wave it in his direction, hiding its waning colour. That apparently is no deterrent, however: as I proceed to find out throughout the month, it isn’t whether I’m married that matters. It’s whether I’m a woman or not, and, especially, a foreign one.

After a few such occasions, I learn that it is better to speak as little as possible, to only enter specific cabs (depending on the age and the attitude of its driver), and to always pretend to understand much less Arabic than I actually do.

To clarify: no, there are no female taxi drivers in Cairo. That would be asking to get assaulted, I’m told. Women are better staying at home and finding a husband. My Arabic teacher, well aware of my own curiosity towards her, explains that it is expected for Egyptian women to live at home during their studies up until they get married, at which point they move in with their husbands. There’s no stage in between, and, most often, no job either.

In fact, young women aged 15 to 30 have the lowest employment rate in Egypt at 13 per cent, according to a 2013 report by the International Youth Foundation. On the other hand, young men of the same age have an employment rate of 61 per cent. (This is still low, compared to Canada’s 86% that same year.) After the Arab Spring revolution that overthrew Mubarak, Egypt’s tourism industry lost revenue of $2.5 billion between 2011 and 2013, according to Ahram English, and the employment market is still reeling from the shock.

It’s hard to explain how strange it was to visit the pyramids as one of the only tourists, with dozens of workers waiting for me to pick which one of them I would pay for a camel ride in the glaring sun. Just a couple of years previously, the place would have been packed, and it would have been me waiting for my turn to ride the camel.

It’s because of this lack of fellow tourists that, when I told Canadians of my plans to travel to Cairo, they constantly warned me of my place in society as a young girl. I came to the city with no experience, but instead a hundred lectures’ worth of preparation: long-sleeved shirts, close-toed shoes, baggy pants and a modest gaze to the floor. But it’s unavoidable to admit that I’m not Egyptian. A tourist can be spotted from a mile away here, especially since the loss of tourism, and a foreign woman can be found among the “Hello, lady” calls of locals wanting to interact with what little English they know.

That’s the Cairo I experience in my cab rides and on busy streets. There’s also the Cairo that Egyptian women face every day. In a country where domestic violence and marital rape are not considered criminal offences, the patriarchy is tangible, even if I rarely feel in worse danger than having to deal with an excited cab driver. Especially during the past protests, such as when the military forced virginity tests on demonstrators in 2011, sexual assaults have started to make the news more and more in Egypt. One committee member from the Shura Council famously declared last summer, “The woman has 100 per cent responsibility.” That seems to be the main attitude.

Nevertheless, I now find myself in a post-revolution Egypt where there are as many women as men walking by themselves downtown, about one-third without wearing a veil. And I definitely don’t need to worry about wearing sandals or showing my elbows when I’m in busy streets. There will be glares whether I show my elbows or not. In a way, things seem to have improved since the revolution of 2011, where the protesters, dominantly Egyptian youth, called for the implementation of civil and social rights, braving the danger of military assault or rape.

At the very least, things have changed since last summer. For one thing, sexual assault has finally become criminalized in court. In the beginning of May, when my wedding ring was still fully gold, the first man in Egypt was charged with sexual assault – a fine and one year in prison, says Le Monde, but it’s something.

Shoft Taharosh, “I Saw Harassment,” a relatively new group that monitors sex crimes in Egypt, reported another example of slight progress, Le Monde reported. The dean of Cairo University issued a public statement after a female student was assaulted on campus, saying that she was wearing “inappropriate clothing.” Later, however, he was forced to apologize and open a formal investigation. Again, it’s something, I guess.

By the end of the month, as I wait for my last cab ride to the airport, all lustre from my wedding ring is gone – rusted and brown, it irritates my finger and leaves no pretence of security. I take it off and let it fall through my fingers to the street without looking, waiting to hear the sound of its impact with the dirt under my feet. 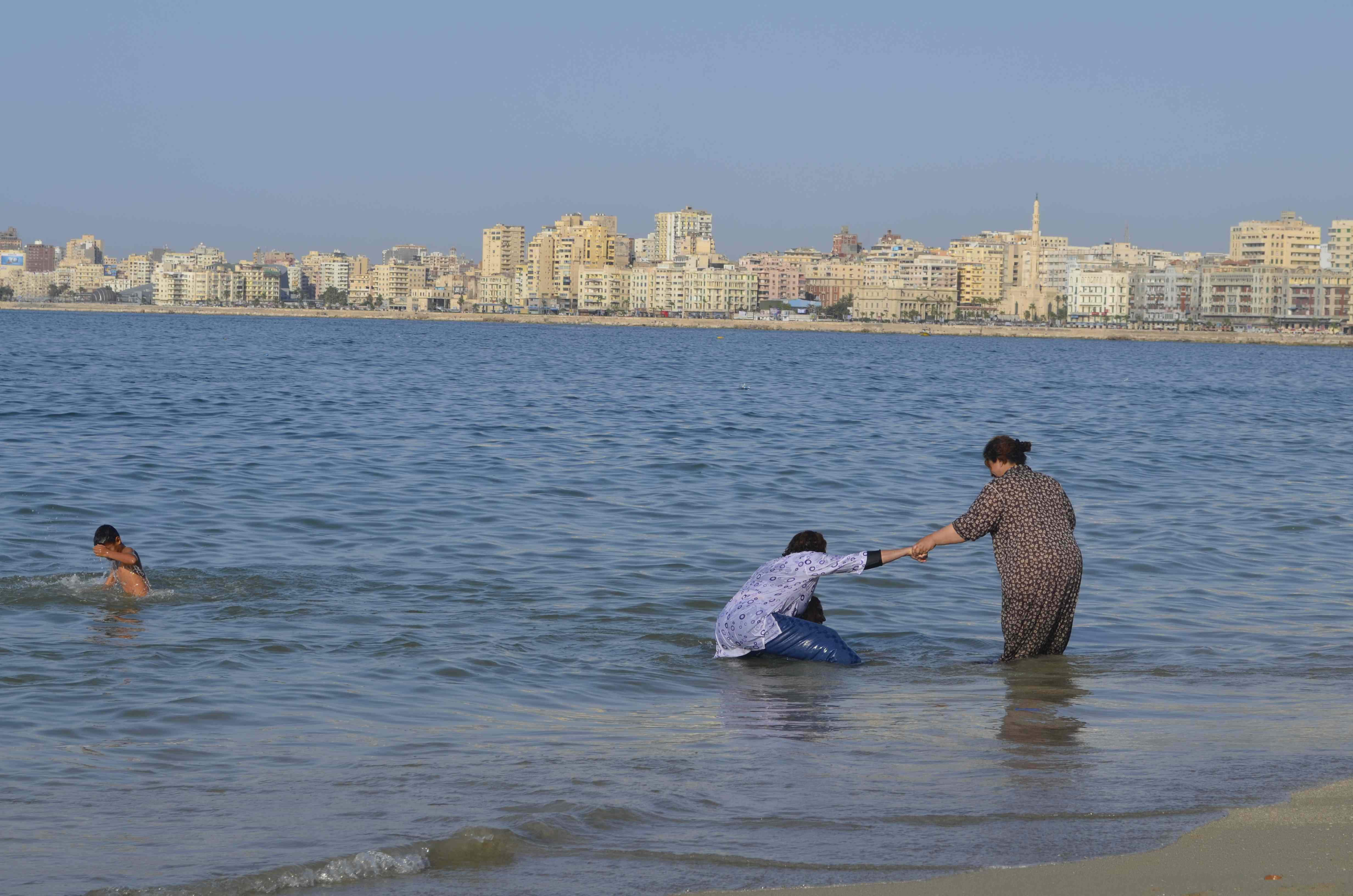 Locals taking a swim in the ocean in Alexandria. 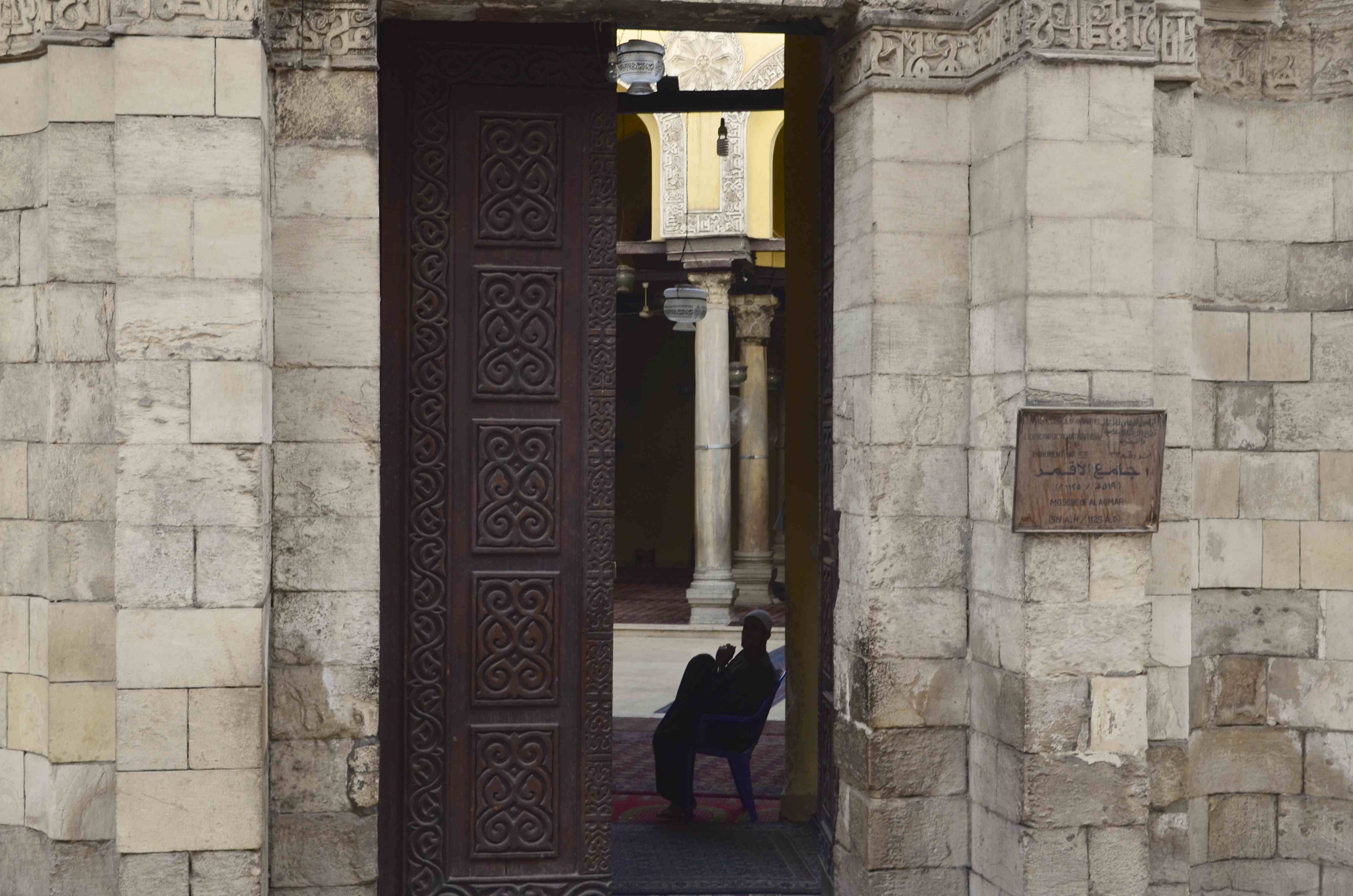 Man looking out the door of a mosque in Cairo.

This article was published earlier in The Eyeopener (3 June 2014).