All of one place: A Muslim saint, a converted Hindu princess, and a Hindu deity

Ethnic and religious antagonisms are not givens, but the outcome of historical and political processes. Borders, as human-made conveyors of state-oriented conceptual frameworks, play a central role in shaping these.

A joint place of worship

Just outside the Indian border town of Mahendraganj, at the top of a low hill, is a shrine (dargah) containing the graves of a Muslim saint and his wife. The legend goes that hundreds of years ago, the saint lived as a man named Kamal, a hero. A monster was devastating the area, and the local Hindu king promised his daughter to whoever could defeat it. Kamal managed to kill the monster and duly married the princess. Upon marriage, she converted from Hinduism to Islam and is now buried next to him in the Muslim shrine. Many people believe that the couple are ‘present’ in their graves, and that they can fulfil any request that is made to them there. 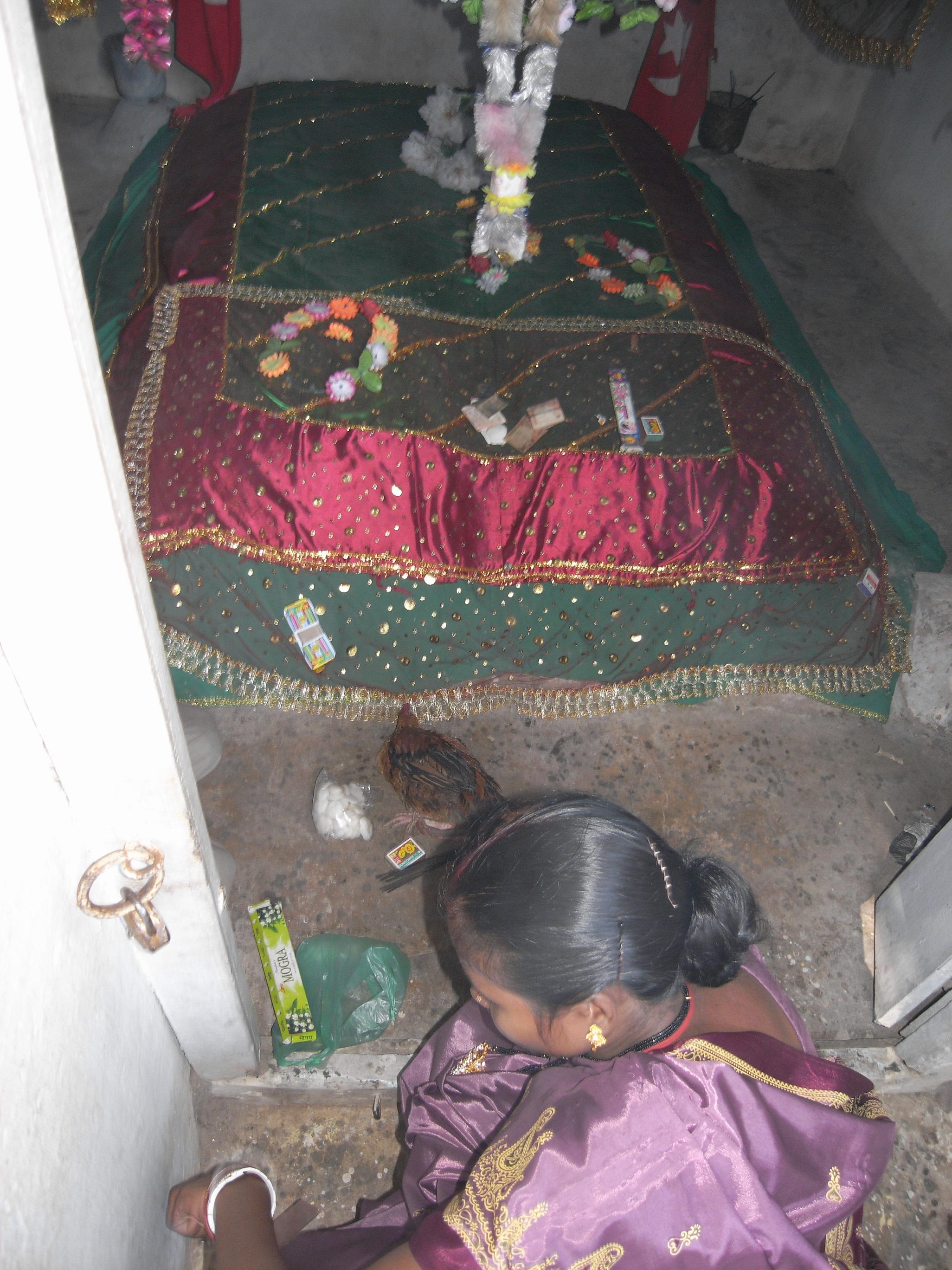 The inside of the Dargah of Hazrat Shah Kamal Baba at Indo-Bangla border.
Photo by Erik de Maaker

I came to the shrine with a friend who wanted to offer a goat to the saint and his wife. While searching for an academic job, she had requested them for help. Now that she had become a professor at a local university, the time had come to redeem her debt. Some of the goat meat was given to the shrine attendant; the rest was cooked into a tasty goat meat curry that we all enjoyed on the lawn next to the shrine. It made a perfect occasion for a family picnic.

Saint worship has a long history among Muslims in South Asia and continues to be very popular, even though the proponents of orthodox Islamic movements increasingly condemn it as un-Islamic. 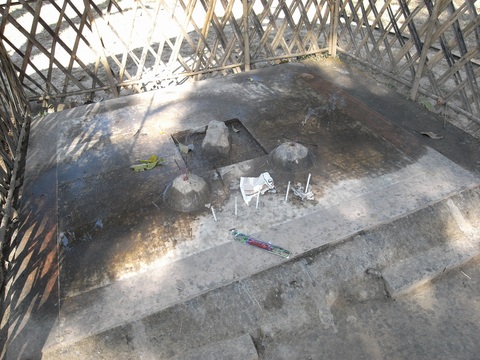 Stone dedicated to the Hindu goddess Kamakhya at the dargah.
Photo by Erik de Maaker

The shrine on the hill defies common religious categorization in other respects as well. Opposite the shrine is a small stone dedicated to the powerful Hindu goddess Kamakhya, and everyone who visits the shrine calls upon her as well. The shrine is an Islamic place of worship, yet it attracts both Muslims and Hindus. Considering the extent to which political conflicts in South Asia have emphasized religious differences over the last sixty years, it is remarkable that places like this continue to exist. 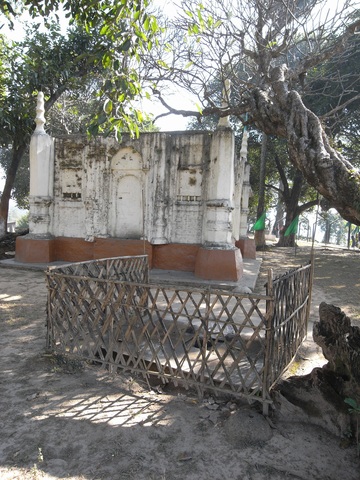 The stone dedicated to the Hindu goddess Kamakhya opposite
the Islamic Dargah of Hazrat Shah Kamal Baba. Photo by Erik de Maaker

In other ways, though, the shrine has indeed been affected by political change. The border between India and Bangladesh runs along the perimeter of the shrine. This border is the outcome of the hasty and violent partition of British India. More or less overnight, people with distinct ethnic, religious, and linguistic backgrounds, who had always lived with and among each other, found themselves living in different countries. In the first decades, the border did not necessarily impinge on people’s movements. More recently, this has dramatically changed, notably due to the construction of the so-called ‘security fence’. Due to the ‘hardening’ of the border, the shrine has become inaccessible to Bangladeshi devotees.

Due to partition, the Muslims of Mahendraganj, who were once part of the dominant community in the region, have become a minority in the Indian state of Meghalaya. As ethnic Bengalis and Muslims, they do not benefit from the many legal, fiscal, and economic measures that favour the ‘tribal’ majority of that state. Electoral politics in the region tend to play the ethnic card, in which branding Muslims as ‘foreigners’ is a recurring theme. Militant ethnic insurgents, who advocate the ‘tribal’ cause, count Muslims among their prime victims. There is little that the latter can do, except to pay up the ‘contributions’ demanded. Narratives of belonging, place-making, and exclusion are central to the political conflicts that play out along the fringes of South Asia. 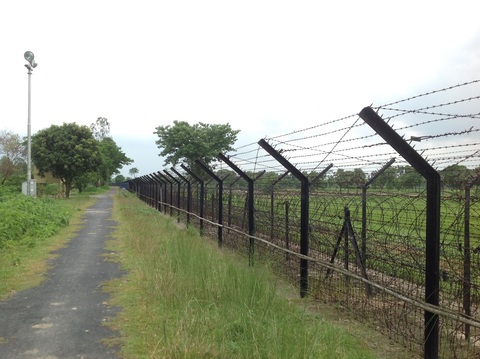 Security fence at the Bangladesh border at Dakshin Denajpur near the Dargah.
Photo by Arupparia

Research on people and borders in South Asia

Together with Sanjukta Sundarason (LIAS), I will explore processes such as these in the context of the AMT-funded project ‘Postcolonial Displacements: Migration, Narratives and Place-Making in South Asia’ (starting September 1st 2015). The project focuses on the multiple ways in which migration in South Asia contributes to the imagining, questioning, subverting, and reframing of territories, nations, and communities. Foregrounding the contested fringes of the politically divided South Asian subcontinent across historical and contemporary socio-political contexts, the project asks: How do people in South Asia engage, resist, and support the arbitrary borders that divide, define, and delineate the states of the subcontinent? And how are cultural imaginations, narratives, and claim-makings shaped by histories, memories, and experiences of mobility and migration?

The ethnic and religious antagonisms that, in political contexts, often characterise intra-communal relationships in contemporary South Asia are not a given. The continuing cohabitation of a Muslim saint, a converted Hindu princess, and a Hindu deity at the Mahendraganj shrine suggests that – notwithstanding ethnic and religious polarisation in the region – there continue to be convergences that supersede these sorts of oppositions.

This blog was published earlier on the Leiden Anthropology Blog.