Thinking with Clifford Geertz in Rabat

In October 2018, fifty years after the publication of Clifford Geertz’s “Islam Observed”, a group of scholars gathered in Rabat to explore the relevance of the Geertzian approach for contemporary research on Moroccan and Indonesian society.

This workshop took place at the Netherlands Institute Morocco (NIMAR) and was a joint collaboration between NIMAR and LUCIS. 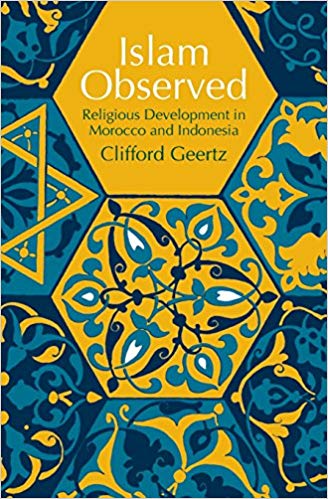 Bringing together researchers from various disciplinary backgrounds, the workshop conveners Léon Buskens, Nico Kaptein, Adriaan Bedner and Bart Barendregt initiated a two-day platform for a fruitful exchange with a comparative edge. A major theme which weaved together the diverse presentations was social and religious change in Morocco and Indonesia, accompanied by the question “what happens to faith when its vehicles alter?”

After the welcoming speech by NIMAR’s director Léon Buskens, keynote speaker Wim van den Doel brought the audience’s attention to another influential academic who studied Islam in Indonesia half a century before Geertz: the Dutch colonial scholar Christiaan Snouck Hurgronje.

Snouck Hurgronje made an important contribution to Islamic studies: the shift from studying religion merely through texts to observing Islam in everyday life. Van den Doel posited that, if Geertz is to be commemorated as a key figure in the study of Islam, so should the work of Snouck Hurgronje not be forgotten by contemporary scholars of Muslim societies.

Nico Kaptein provided a critical account on Geertz’s work by identifying some of its omissions and shortcomings. From the perspective of a historian, Geertz’s examination of Islam in Indonesia through the metaphor of a mythical figure that lived centuries earlier (i.e. Sunan Kalidjaga), seems ahistorical and even strange.

Not only did Geertz generalize and have a disregard for textual analysis, he also refrained from addressing the political dimensions of Islam. This is all the more remarkable, because during Geertz’s fieldwork in Indonesia political Islam manifested frequently in the form of the Darul Islam movement. Kaptein concluded that the prominent role of Islam in Indonesian politics in recent decades has proved that Geertz underestimated Islam’s political potential.

Another critical analysis that shed light on what Geertz did not (or did not want) to observe came from Zakaria Rani the next day. Rani argued that in examining Islam in Morocco, Geertz had ignored the violent aspects of charisma in the Moroccan dynasties and thereby failed to see the political repercussions caused by the symbolics of power. Rani also paid attention to the role of gender and women in contemporary Moroccan Sufi brotherhoods, another aspect that is rarely found in the scholarly literature.

Coming from a comparative literature and culture studies background, Mustapha Ait Kharouach shared his analysis of Islam Observed from the perspective of art and poetics. He argued that Geertz’s description of two culturally different societies reveals an ‘aesthetics of being’ and can help us to understand the role that culture plays in creating the aesthetics of communities.

Two other afternoon sessions dealt with topics regarding Islam in Morocco. Fatimaezzahra Abid spoke about the still marginal position of Moroccan female Islamic scholars who are advocating an interpretation of Islam that is non-patriarchal and that does not delegate women’s participation in society to the domestic sphere.

Rebecca Ruf showed how the perception of Islam in Morocco today and certain aspects of how it is practiced are influenced by French colonial policies and the French administration’s approach to religion and religiosity.

The remaining four presentations all focused on recent developments of Islam in Southeast Asia, notably in Indonesia and Malaysia. Martin Slama addressed the question of “what happens to faith when its vehicles alter” by looking at digital media as one of the new vehicles through which Islam is conveyed in Indonesia today.

He also reflected on the various categories used by Geertz to classify Indonesian Muslims into different streams, such as ‘reformist,’ ‘modernist,’ ‘fundamentalist,’ as well as the wide use of similar categories in contemporary studies of Islam. Slama argued that labelling Islamic figures, communities or movements by such categories can be quite misleading in this day and age.

Adriaan Bedner used Geertzian concepts to explain the causes and developments of opposite trends in present-day Indonesia, i.e. female emancipation on the one hand and LGBT-suppression on the other hand. Looking at it from the legal perspective, he showed how the Indonesian state has become more involved in theological argumentation and, contrary to previous times, is now omnipresent in people’s daily lives.

Bart Barendregt shared his case study of Malaysia by presenting a “thick description” of the nasheed song “You Came to Me,” a duet between the Malaysian pop star Siti Nurhaliza and the Iranian Azeri nasheed singer Sami Yusuf. His analysis showed how Islamic music, and the broader trend of post-Islamic chic, is now an important arena for the public discussion of gender values and moral behavior of superstars in Malaysia, in particular of female singers.

Also connected to the topic of entertainment and pious pop singers in Southeast Asia, I applied Geertz’s theoretical framework of religion as a model of and a model for reality to Indonesian charity concerts. In addition, I used my case study to re-evaluate the “force” and “scope” of contemporary Islam in Indonesia, fifty years after Geertz employed those terms in comparing Indonesia and Morocco.

Overall, taking up Geertz’s Islam Observed as a theme proved stimulating for the discussion on Islam in Morocco and Indonesia today. Some innovative concepts and ways of looking developed by Geertz haven’t lost their relevance despite the profound changes that have occurred in these societies in the past fifty years.

At the same time, the presenters who offered a more critical perspective on Geertz’s work remind us that, besides building on this legendary scholarship of the past, it is also important to look at what Geertz did not see.

It is always good to remember that Geertz was a man of his time, embedded in certain streams of thought. His (partially) failed predictions can stimulate contemporary scholars to reflect on our own (often unconscious) values and assumptions.